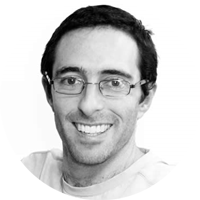 John brings to the team at London City Physiotherapy a wealth of experience in managing spinal pain and sports injuries, both in the UK and Australia. John graduated from the University of Queensland, Australia with a Bachelor of Physiotherapy in 1996. He worked for three years in a large Queensland hospital, predominantly in neuro-rehabilitation, orthopaedics and musculoskeletal physiotherapy, before heading to the UK in 2000.

John prides himself on providing individualised care to patients to help them achieve their specific goals; after all, no two patients have exactly the same injury, experiences or aims! John is also a fully certified Pilates instructor through the Australian Physiotherapy and Pilates Institute (APPI), based in London. Combined with his excellent manual therapy skills, John sees Pilates as a user-friendly medium to reduce recurrence of injury. It allows him to apply his Physiotherapy principles to facilitate a controlled return to functional activities and assist in the reduction of symptoms.

Continuing professional development has always been important to John. At the end of 2007 he completed his Masters degree (MSc Pain) at Kings College London, which focused on the study of pain mechanisms. He was also a senior lecturer for the APPI between 2003 and 2008, regularly training and accrediting Physiotherapy colleagues throughout the UK and Southern Ireland in Pilates. In 2008-9 John spent eighteen months as an Honorary Research Fellow at The Brompton Hospital in London, and was involved with the hospital in a research project investigating the effect of musculoskeletal physiotherapy on dysfunctional breathing.

During the 2010 – 2011 and 2011 – 2012 cricket seasons, John travelled to India as the Head Physiotherapist for Saurashtra, the Indian first class (county level) cricket team.

John has also provided physiotherapy and mental training for the polar explorer and environmental campaigner Parker Liautaud for all of his expeditions to the north and south poles. In this television interview John discusses his role in Parker's preparations for the world record setting 565km trek in December 2013. It is now officially the fastest unsupported trek from the coast of Antarctica to the South Pole. In the interview, John also links up live with Parker during the Antarctic expedition.

In his spare time, John also fits in marathons (still trying to get those PBs!) and learns Spanish and Japanese. He has hiked many long distance trails throughout the UK, Australia and elsewhere, and has travelled extensively.

Contact us today to book an appointment with John Nugus. You can call on 020 7236 3334, or email us at enquiries@londoncityphysiotherapy.com

Back to Our Team Page